Everyone knows that living under constant stress is never good for you! However, sometimes, the chronic stress you are experiencing might emerge in surprising ways, slowly chipping away at your physical and emotional well-being. Unhealthy food habits, clenching jaw muscles at night, acne, irritability, and many other more serious health issues can all be a sign that you are under too much stress. It’s time to prioritise your health and dial down the stress in your life for a little while. Here are 14 of such signs, some of which are guaranteed to surprise you.

Both short-and long-term stress can affect your cognitive capabilities, with memory being one of them. People who live under excessive stress often report having difficulty retrieving important information and even more issues with memorising new things. Why this happens is not specified, but it is suggested that the memory problems have both a psychological and a neurological cause.

On the one hand, high cortisol (the stress hormone) levels in the brain were linked to short-term memory loss in seniors. So hormones might be issues stressed people often experience likewise increase forgetfulness, so these too, likely contribute to the issue. In any case, relaxing your body and mind may help you restore your true memory.

Stress eating is not a myth. It’s a real phenomenon, one that’s more dangerous than you’d think. When stress levels rise, the delicate hormonal balance can be upset, and often, the levels of hunger hormones are affected, too. This is why some people will not be able to eat while they’re stressed, whereas others will tend to overeat and indulge in junk food.

The result is a terrible habit that contributes to weight gain and other health issues, as well as an emotional attachment to food.

Increased hair and skin ageing can be the result of chronic stress, and it is not only because we tend to do less self-care when we are stressed out. Studies have shown that high-stress levels decreased collagen production in the skin. Collagen is the building block of our skin cells and the substance that makes skin plump and youthful-looking.

As for the grey hairs, the neurotransmitter called norepinephrine, that’s secreted during a stressful moment in the sympathetic nervous system seems to blame. As a result of the so-called fight or flight response to stress, norepinephrine drains the pigment from melanocyte cells in your hair, causing grey hairs.

Stress is not the only cause of wrinkles and grey hairs. There are many other factors, but it is undoubtedly a major factor contributing to these signs and symptoms.

Immune suppression is one of the most dangerous and least understood effects of stress on the human body. Several studies have shown that chronic stress affects the immune system. One notable paper finds that people experiencing much stress typically suffer 70% more respiratory infections and suffer from cold and flu symptoms for 61% longer than those who experience low levels of stress.

Some researchers believe that this is because people who suffer from stress are less sensitive to cortisol since they have higher levels of the hormone as a result of stress. So their immune cells fail to activate when cortisol levels rise in response to an infection. Still, the precise mechanism is poorly understood. However, you should take extra care in protecting yourself from infections if you are under much stress.

A famous symptom of the fight or flight response is a rapid heartbeat, which is rather useful when your cortisol levels rise in response to a physical stimulus. For example, a rapidly approaching car, when you are crossing the street, will cause your muscles to intake more oxygen and make running away from the dangerous situation easier.

Unfortunately, running away from most issues people face these days isn’t a solution, but our bodies still react to emotional and work-related stress the same way, pumping up the heartbeat, and as a result, contributing to hypertension. Combine this with a stress eating habit, and you have a recipe for a cardiovascular disaster, so please watch your stress levels and diet to avoid heart issues and hypertension.

Another cognitive symptom of stress is difficulty concentrating or brain fog. While this symptom is often temporary, in some people, difficulty to maintain focus due to stress can significantly impair their work or school performance. These difficulties, in turn, can raise your stress levels even more and cause anxiety or depression, all of which are bound to worsen your cognitive health further.

During times of intense stress, your libido, too can and often does take a hit. This is because stress is a complex neuropsychological response that alters one’s hormone levels and affects your emotional well-being. Stress, anxiety, and depression (the latter two can be caused by stress as well) can lower your sex hormone levels. With studies finding a correlation between low testosterone levels and stress, can and probably does contribute to the sex drive. Impairment in both sexes, de-stressing and focusing on your emotional health is key to prevent and deal with these libido changes.

Breathing problems such as shortness of breath and even asthma are significantly more common among people who experience much stress. These issues can also become worse if you are under stress, as your chest muscles and diaphragm can tighten in response to stress, making your breath faster. As a result, this can cause anxiety, which fastens the breathing and heartbeat even further. In cases like these, it is essential to make yourself breathe slowly and deeply to stop the vicious cycle.

Interestingly, researchers also found that women who were stressed out during pregnancy were a lot more likely to give birth to kids with asthma and other breathing difficulties. So stress can have very far-reaching health effects.

Chronic stress is among the main causes of insomnia. However, trouble falling asleep is not the only sleep condition that can be caused by stress, as some people tend to be even more sleepy when they are stressed out.

Irrespective of the condition, the majority of people experiencing sleep issues will also feel more tired throughout the day. This cause of stress-related sleep issues is both hormonal and psychological, with high cortisol levels and the activation of the sympathetic nervous system (both hallmarks of the stress response) meddling with sleep hormone levels and one’s ability to relax.

Fatigue can also occur without sleep issues in people experiencing stress, as reported in a 2011 study. This type of fatigue can become constant if stress persists, developing into a condition known as chronic fatigue syndrome.

Skin rashes and the re-emergence of dormant conditions, such as the herpes virus or shingles is also common among people who experience stress or a traumatic event. As we mentioned earlier, stress can depress your immune system. When your immunity is low, the different chronic conditions, including the herpes virus that is causing cold sores, more often than you used to, can be a sign that you are under too much stress.

Emotional and psychological symptoms are hallmarks of chronic stress, with people who are under a lot of stress also suffering from anxiety or depression. When you are stressed out, you are more likely to react harshly, be angry and more irritable than usual. This is likely because of other symptoms, such as tiredness insomnia, in particular. However, this is also due to hormonal fluctuations in the brain.

When it comes to depression sufferers specifically, stress can increase the likelihood of getting a major depressive episode, As suggested in studies both in adolescents and adults. So make sure to compensate for stressful situations if you are suffering from depression.

We’ve often heard about THE GUT-BRAIN AXIS many a time, which is essentially a close link between your gut microbiome and the brain. When you are stressed out, the balance of microbes that live in your digestive tracts is upset, which manifests itself in bloating, diarrhoea, constipation, and even heartburn.

IBS, in particular, has been linked to stress. The fact that we often tend to eat fast food when we are stressed out doesn’t help our digestive system either, of course.

Chronic stress is practically synonymous with chronic inflammation because high cortisol levels have a very similar effect to an actual infection, as discussed above. These high levels of inflammation in the body combine with hormonal issues do often result in hormonal breakouts, which are more common among women, especially around their period.

Also, high cortisol levels increase oil production in the pores, as suggested by the American Academy of Dermatology, which also causes acne. The same can also cause scalp issues, such as dandruff.

Hair Loss can likewise be caused by stress. Traumatic life events can trigger temporary hair loss up to 3 months after the event itself. It was even observed that chronically stressed people, on average, have thinner hair than those with lower stress levels.

Do you often wake up with a tight or painful jaw in the morning? Many people with higher stress levels are known to suffer from bruxism and often painful condition that occurs when you grind or clench your teeth. This condition can result in jaw pain, headaches. Stress and anxiety management is the primary preventative methods of bruxism.

This site uses Akismet to reduce spam. Learn how your comment data is processed. 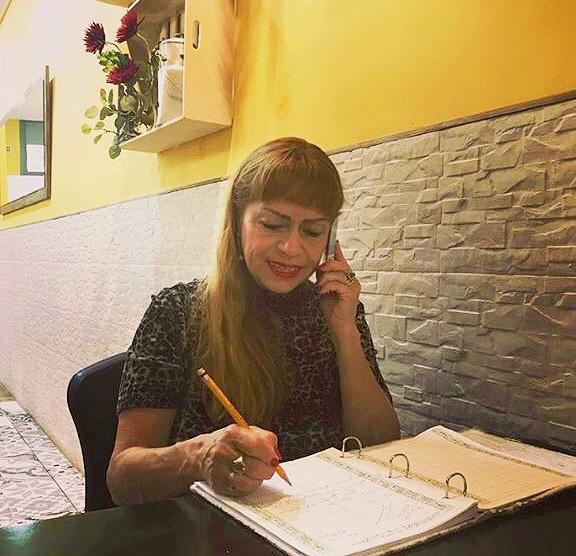 I graduated from Steiner Beauty College London in 1990 and became self-employed working in Wallington. In 1996, I opened my first beauty salon at the top of Wallington High Street (Woodcote Road), and have been there providing beauty and health services to thousands of clients for over 20 years.

Every month you will receive our latest news from the salon, health tips, Nelly's beauty blog, special offers, and much more!
We use cookies on our website to give you the most relevant experience by remembering your preferences and repeat visits. By clicking “Accept”, you consent to the use of ALL the cookies.
Cookie settingsACCEPT
Manage consent

This website uses cookies to improve your experience while you navigate through the website. Out of these, the cookies that are categorized as necessary are stored on your browser as they are essential for the working of basic functionalities of the website. We also use third-party cookies that help us analyze and understand how you use this website. These cookies will be stored in your browser only with your consent. You also have the option to opt-out of these cookies. But opting out of some of these cookies may affect your browsing experience.
Necessary Always Enabled

Performance cookies are used to understand and analyze the key performance indexes of the website which helps in delivering a better user experience for the visitors.

Analytical cookies are used to understand how visitors interact with the website. These cookies help provide information on metrics the number of visitors, bounce rate, traffic source, etc.

Advertisement cookies are used to provide visitors with relevant ads and marketing campaigns. These cookies track visitors across websites and collect information to provide customized ads.

Other uncategorized cookies are those that are being analyzed and have not been classified into a category as yet.